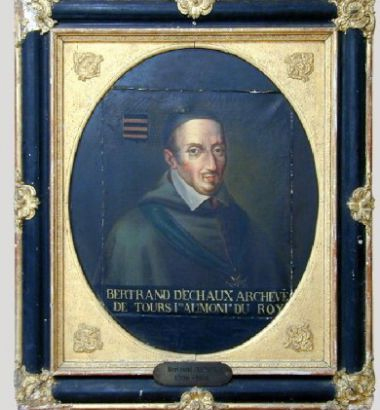 The castle of Etxauzia in Baigorri is the prime witness of the province of Nafarroa and the entire Basque Country’s history.

The meaning of the name is still controversial among the historians. « Etxauz » (is sometimes written Echaoz, or Echauz, and even Echautz, as spelled in the medieval times.

Anyway, the place where the current castle is situated is the same place as the one in which the Baigorri viscounts lived since the 11th Century. They lived there for eight centuries (from 1033 to 1830). The castle overlooks the village, it has two medieval-time towers on both sides (12th Century ?) and two more modern ones (17th Century ?). It has a square shape with its four corner towers. It was built on top of a rocky hill, on a promontory or a sort of feudal clump. The oldest part of the castle dates from the end of the 11th Century or beginning 12th Century, but the most part of the castle has been rebuilt at the end of the 16th Century. The inside has been remodeled in the 17th, 18th and 19th centuries. It is probable that the castle was first built in wood. Archaeological researches and prehistory would certainly tell us more about it…

From what the historian named Joanes from Jaurgainea tells us (in the book « La Vasconie » written in 1898, Santxo III, who was the king of Nafarroa from 1004 until 1035 offered the Valley of Baigorri (made of eleven hamlets) to a close relation of his, thus making him viscount in the process and asking him to watch after it. Gartzia Otsoa was his name, he was the Bizkaia viscount’s brother and the court butler at that time.

The Baigorri viscounts are the Nafarroa kings’ close relatives and kinsmen. Since the 11th century, they’re also members of the court and majors in the Kings’ army or castle wardens and known as Presidents of the « merindade » or County. In the middle of the 14th Century, the Baigorriar viscounts took the name of « Etxauz », that is to say they took the name of the main house or main castle. In the archives of Pamplona (Iruña), there are documents dating from as early as 1350, speaking of « Maria d’Echaoz » who was the viscount’s daughter, and « Miguel d’Echaoz », probably the viscount’s son who was a studman. He helped the king of Nafarroa, Carlos II, when he was in Normandy until 1364, until he was killed in a struggle.

The dinasty of the Etxauz heirs know their glorious epoc around the end of the 14th Century and beginning of the 15th along with Semen Gartzia, called « Lord of Etxauzea ». He was the fourteenth viscount of Baigorri in 1371. He is named at the head of the royal castle of Rocaforte in Isturitze to shield the boundaries of Lapurdi, Akitania (Aquitaine).

In 1389, he is called to be a knight by the King Carlos III and in 1390, he is present at the crowning of the King. His son, Joanes is made Knight of the « Jondoni Joanes of Jerusalem » array in 1413. He is also the governor of Lizarra County, . In 1398, his wedding takes place in the Olite royal castle. Karlos III offers him a bull fight and 725 squirrel furs.

Between 1512 and 1527, he is closely related to the Gramont nobility. He upholds the independence of Nafarroa along with the legal sovereigns, Jean d’Albret and Catherine de Foix- Béarn. Once Nafarroa is conquered, the Etxauz people, faithful to the declining family of Albret, become great noblemen. They take part in the liberating of the North of the Pyrenees and from 1527 on, this small kingdom of Nafarroa will become « Baxenafarroa » . The greatest lords of the kingdom are from Etxauzia, Gramont and Luxe, all faithful to the Albret kings.

What about the castle during the religious wars ? Was the joining of the Catholic League by Antonio Etxauz, the son of Grazian the reason why the castle was burned by the protestant forces of Jeanne d’Albret, against whom he had revolted ? Archives show nothing about the incident. What we know is that the castle was rebuilt at the end of the 16th and early 17th centuries. Beltran from Etxauzea, Antonio’s youngest son was Bishop of Baiona (Bayonne) from 1599 till 1617, and later Archbishop, from 1641 until he died. Meanwhile, he was Henri IV, King of France and Louis XIII’s first chaplain and counselor. There is a very interesting letter that he wrote to his brother, all in Euskera.

In the beginning of the 18th century, the viscount title and castle goes to the Saint-Martin family from Capbreton in Gascony. Then, around 1750, it falls in the hands of the Capenne d’Amou family from Senpere in Lapurdi. Marthe-Madeleine de Saint-Martin, the viscountess, married to Henry Caupenne d’Amou, takes the Baigorriar to Court so as to obtain rights the Etxauzia people never had. The feud goes overboard with the locals ! The 14th and 15th century displays disappear and the Etxauzea lords have to lead a much simpler way of life.